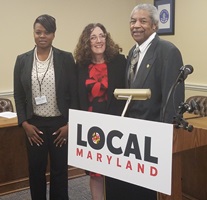 On Wednesday afternoon, the Maryland State Conference of the NAACP and Fight for $15 leaders called on Maryland lawmakers to reject a planned amendment to the minimum wage bill which would block the ability of cities and counties to pass higher local minimum wage laws than the state. This type of effort, known as preemption, would unfairly hurt people of color and lower-income residents, who make up at least half of the population in most major Maryland counties and cities.

“This amendment will block people of color living in cities and counties from earning the higher wages they need to support their families,” said Gerald Stansbury, president of the Maryland State Conference of the NAACP. “The NAACP finds this amendment both offensive and harmful to people of color.”

Advocacy organizations across Maryland — including 1199 SEIU, the Maryland State Conference of the NAACP, the American Heart Association and National Employment Law Project — launched LOCAL (Let Our Communities Act Locally) Maryland, a coalition committed to protecting the ability of local elected officials to pass laws that support healthy families, a clean environment and good jobs. LOCAL Maryland will pay special attention to state legislation that would take away the ability of local governments to protect residents’ health and quality of life. LOCAL Maryland is advocating for the bill (H.B. 166, S.B. 280) to be enacted without preemption language.

“The American Heart Association supports the right of every community to enact laws that help children and families stay healthy,” said Deepak Suri, member of the AHA Board of Directors. “LOCAL Maryland is a unique and diverse coalition of groups that supports a brighter future for Maryland—we support their work and would like to see similar coalitions form in communities across the country.”

“State lawmakers around the country are blocking cities, towns and counties from passing laws that support healthy families, a clean environment and good jobs for their citizens,” said Shawn McIntosh, executive director of Sugar Free Kids Maryland. “States – such as California, Washington, and Pennsylvania – have already passed these types of laws. Now, the same thing is starting to happen in Maryland. When special interest groups push state lawmakers to block local laws, it hurts the health, safety and paychecks of our families, neighbors and friends.”

“Maryland’s Fight for $15 campaign has a simple goal of giving hard-working state residents wages they deserve in order to cover basic living costs,” said Ricarra Jones, acting political director of 1199SEIU. “We are working with LOCAL Maryland to call on the Maryland General Assembly to pass a wage measure that benefits all residents while preserving the ability of local government to work on behalf of our own communities.”

“We must protect the ability of our cities, towns and counties to pass laws that keep our families healthy, our environments clean and good jobs plentiful,” said McIntosh. “The minimum wage amendment will put the health of our most vulnerable residents at risk, including children, the elderly and communities of color.”