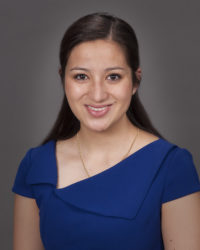 Less than three years ago, Crystal Perez was working with families in colonias along the Mexico-United States border where she learned just how complex issues like obesity and food insecurity were.  Perez decided to move to the east coast with a goal of becoming involved beyond just her research interests of obesity and healthy eating. She now serves as a liaison between Maryland organizations that share a goal of improving health for the children and families of the state, while pursuing her Ph.D. in Health Policy and Management at Johns Hopkins University.

Perez grew up in the small town of San Isidro, Texas, just 30 minutes north of the Mexican border. She received her B.S. in Biology and MPH from Texas A&M University and worked as a research assistant that looked at nutritional disparities of families with mixed immigrant status. It was there she realized that the environment, co-occurring health issues and lack of social resources all played a role in families experiencing food insecurity and obesity.

In 2017, Perez started work towards earning her degree at Johns Hopkins. It was there that she became involved with Maryland Public Health Association (MdPHA), an organization of public health professionals dedicated to improving the health of all Marylanders. Perez took a media advocacy class in which now MdPHA president, Raimee Eck, was the teaching assistant. Eck quickly became a mentor to Perez and launched her involvement with MdPHA.

Shortly afterwards, Sugar Free Kids executive director, Shawn McIntosh, spoke at the JHU Center for Law and the Public Health. The topic was the newly-introduced Baltimore City Healthy Kids’ Meal Bill, which when passed, made water, milk and 100% fruit juice default options on kids’ menus in the city. Perez met with McIntosh and quickly became intrigued by how this legislation could affect the health of city children. She followed the campaign through the bill’s passage in the spring of 2018 and started joining in coalition calls earlier this year.

MdPHA has a mission very similar to that of Sugar Free Kids. It’s no wonder that they are one of the most active and essential partners of our coalition since the beginning. The group reaches its goals through education and advocacy, focusing on increasing physical activity and decreasing sedentary lifestyles, reducing or eliminating racial and ethnic health disparities, and supporting important public health measures across the state.

As a doctoral student, Perez has recently become the liaison between MdPHA and Sugar Free Kids Maryland.  “I’ve always liked how Sugar Free Kids Maryland works on policy change at both the local and state levels,” said Perez. “It’s exciting to actually see how the coalition work gets materialized. To see the Baltimore City healthy kids’ menu legislation introduced and pass, while learning about everything behind the scenes was really inspiring to me.”

Perez is also excited about becoming active with LOCAL (Let Our Communities Act Locally) Maryland and its fight against issues involving state preemption. “We support LOCAL Maryland because they are working hard to fight preemption policies that would prevent us from creating and maintaining healthy environments for families,” said Perez.

Perez intends on joining the MdPHA board in the near future and is looking forward to her work with Sugar Free Kids LOCAL Maryland and continuing it after her graduation in May of 2021.