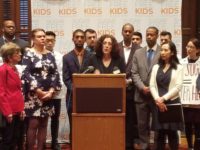 BALTIMORE – On Feb. 26, the Baltimore City Council unanimously approved legislation that will create healthier drink options for Baltimore City families, when ordering kids’ meals. The bill (17-0152) received all 15 votes from the full council and will be voted on for third reader passage at the City Council meeting on March 12.

The bill ensures that water, milk, 100% fruit juice, sparkling water and flavored water without added sweeteners will become the default drink options for all restaurants kids’ meals in the city of Baltimore. Families will be able to order other drinks upon request. The bill will improve health for Baltimore City children by making healthier choices easier to make.

Baltimore becomes the largest American city to pass such legislation and the first on the east coast. Large chains such as McDonald’s, Wendy’s, Dairy Queen, Burger King, IHOP and Applebee’s have chosen to remove sugary drinks from their kids’ menus since 2015 with high levels of success.

This is a monumental victory for the city of Baltimore as it moves closer towards a culture of health.

Our coalition is excited that the Baltimore City Council has voted to ensure that healthier choices will now be available on kids’ meals in the city of Baltimore. We applaud the leadership of Councilmember Brandon Scott and his colleagues who have voted to prioritize the health of Baltimore children and their families. We thank the parents as well as the many faith, health and labor leaders that supported this policy across the city. We also thank the Baltimore City Health Department, who worked in tandem with us to support this bill.

The bill is designed to address overconsumption of sugary drinks as a key factor in high rates of chronic diseases such as type 2 diabetes, heart disease and tooth decay. One in four children in Baltimore drinks at least one soda each day. Sugary drinks are often the default options accompanying kids’ meals in restaurants, and Baltimore families too often face these choices as they eat out on an average of 2.6 times per week. We strongly believe this bill will help address the crisis facing Baltimore’s youngest residents with one in three school-aged Baltimore children unable to maintain a healthy weight, often leading to chronic disease.

Sugar Free Kids Maryland looks forward to continuing to work closely with partners to advocate for policies improving health in Baltimore City and across the state.