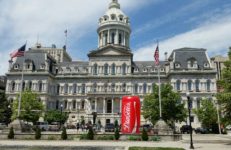 Sugar Free Kids Maryland joined Baltimore City Health Commissioner Dr. Leana Wen and community advocates on June 7 to call on the Baltimore City Council to pass legislation to require warning labels for sugar-sweetened beverages on advertisements, restaurant menus, and in any point of sale in the city where these products are sold during a hearing of the Council’s Health Committee.

“We’re focused on education,” said Sugar Free Kids Maryland Executive Director Robi Rawl. “This measure is about transparency and a consumer’s right to know that sugary drinks contribute to these health epidemics. These sugary drink companies are spending millions of dollars to unfairly target low-income communities and young people.”

One in four of Baltimore’s children drink one or more sodas every day. Research has shown that sugar-sweetened beverages promote weight gain and are the primary source of added sugar and calories in children’s diets. Scientific studies also show that consumption of these beverages can lead to major preventable illnesses such as tooth decay, high blood pressure and type 2 diabetes. In fact, drinking one sugar-sweetened beverage per day increases a child’s odds of becoming obese by 60 percent.

“The science is clear: one of the biggest contributors to childhood obesity is sugary drinks. Far too often, parents are unaware of the dangerous health consequences that these drinks can have for their children,” said Dr. Wen. “As a doctor and a scientist, I know that education is one of the most powerful tools in our toolbox to ensure that residents get healthy and stay healthy. Adding warning labels would level the playing field of inequality and provide Baltimoreans with the vital information they deserve.”

The bill heard by the Council today would require food service facilities, retailers, and certain advertisements posted within Baltimore City, including billboards and transit ads, to post following message: “WARNING: DRINKING BEVERAGES WITH ADDED SUGAR CONTRIBUTES TO TOOTH DECAY, OBESITY, AND DIABETES. THIS MESSAGE IS FROM THE BALTIMORE CITY HEALTH DEPARTMENT.” In January, the Baltimore City Health Department launched the “Rethink Your Drink” public health education campaign to mobilize support for this effort to educate citizens on the health effects of sugar-sweetened beverages. Since the launch of the campaign, thousands of health professionals, faith leaders, elected officials, storeowners, and other community members have leant their support for this legislation online and by contacting members of the City Council.